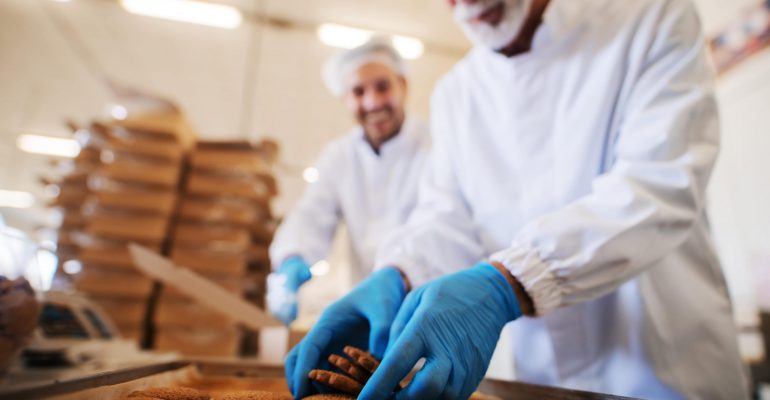 Nitrile glove or disposable gloves, in general, plays a significant role when it comes to food safety.

There has been a growing concern with scientific evidence that 15% of foodservice foodborne outbreaks are contributed by gloves (1).

However, the prevention of food contamination and foodborne illness is regulated by the FDA Food Safety Modernization Act (FSMA). Unfortunately, disposable gloves are often overlooked by FSMA or other similar acts in various countries.

Many F&B service providers signup for inferior quality gloves that don’t specify AQL or any sort of recognized mark for Foodservice safety. One of the many reasons is the lower cost of these inferior gloves.

Average human hands contain millions of microorganisms and with gloves that are easily punctured and leak microbial contamination.

How to avoid nitrile gloves that are not foods safe?

First of all we do advice the following tips to managers in the food industry to achieve best practices in food safety:

It’s all about how managers train their workers for food safety training. But training is not practical if the hand sink is not observed in worker’s sight. As also it should not affect worker’s efficiency levels.

According to CDC study, food industry workers only wash their hands 27% of the recommended time.

Many gloves are not polymer coated on the inside, which makes the process of donning or doffing ridiculously in-efficient and might lead to serious contamination. The reason for that during the donning process might cause rupture to the gloves.

Add to that, the training of doffing gloves for the worker must be taught to avoid potential cross-contamination.

Going for the cheapest gloves on the market isn’t always the best decision. Of course, it’s vital for a buyer of gloves to get the best deal. However, if the gloves are too cheap and below the market price.

Some gloves that don’t state anti-microorganisms and viruses can be permeable to bacteria and viruses. This leads to pathogens being transferred between the worker’s hands and food.

When a glove that easily tears, you need to be aware that it’s either very thin gloves, poorly stored, or expired gloves.

It’s estimated that 70% of the time the ruptured gloves go unnoticed. And this definitely causes serious contamination to food and directly impacts food safety.

You may find that food service gloves are certified under FDA Title 21 CFR Part 177, which states that glove components must comply with FDA regulations and the glove composition must be recognized as safe for food and food packaging.

But here is the problem…

Glove manufacturing will not always be consistent. Sure that a manufacturer might have letters of compliance or have done some previous tests on the gloves.

However, there is no guarantee that the manufacturer’s whole glove production will follow the compliance requirements.

It’s a common practice from glove manufacturers that after achieving the compliance requirements and certifications, they start to alter the way they produce gloves.

This means using cheaper raw materials, increasing rejected gloves in the packaging, the process of the packaging itself might not be done in a hygienic environment leading to glove contamination, and so on.

One of the major reasons is that most factories are pressured to alter their initial way of production is because of economical factors.

Many wholesalers who buy gloves, don’t really bother much about what happens on the back end. They are just looking for the best-priced gloves.

And unlikely a good glove brand that complies with all FDA requirements will be the cheapest on the market.

This will create many missed opportunities for glove factories and it will heavily impact their sales cycle. Thus, it might lead to inconsistent quality with time.

When is it safe to say gloves are food safe?

Well when it comes to Medical or examination grade gloves, there is some sort of measurement called AQL which means “Acceptable Quality Level”.

This AQL measures the pinhole defects against required quality standards. The medical industry standard for AQL is 1.5, which means that for every 1000 gloves produced only 15 pinhole failures are allowed.

The more the AQL number the more pinholes in the gloves.

When it comes to food safety and general use AQL 4 is accepted. Anything more than this is not preferred.

Nevertheless, many glove producers that produce gloves for F&B don’t even bother to put the AQL, because it’s not required in the compliance requirements.

This gives a leeway for importers to import gloves without AQL, which can be a serious problem for food safety.

Moreover, it’s all about the end-user awareness level and how they understand the significance of AQL and its role in defect-free gloves. 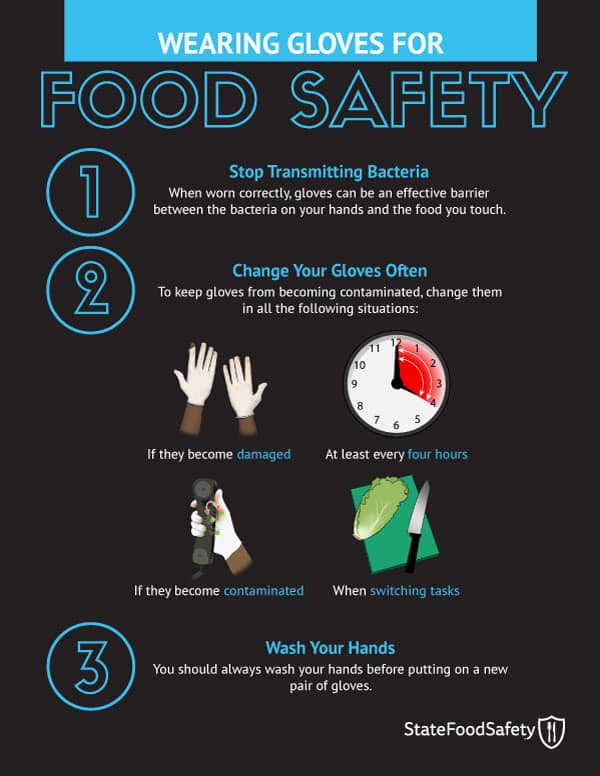 Rule of Thumb: gloves can become contaminated very easily, they must be changed often.

Nitrile vs Vinyl vs Latex gloves in food safety

Most business owners prefer to buy Vinyl gloves as they can save up to 50% of the disposable glove budget.

Why did reputable glove companies stop selling vinyl? And why many governments are planning to ban it?

In 2019 China ceased the production of Vinyl gloves due to severe pollution from factories.

After the pandemic took place in 2020, factories re-opened with a new guideline to follow the new pollution standards.

And, the European Union 2008 banned the use in food safety products of at least one material used in making vinyl gloves out of concern the chemical could leach into food and be ingested. Sweden proposed restrictions on PVC use in 1995 and is working toward discontinuing it entirely.

The reason for the ban on Vinyl for food handling?

The problem with Phthalates is that it migrates from the glove to the food products when it’s contacted.

In general, it’s scientifically proven that Phthalates in Vinyl have been shown to leach, migrate, and off-gas into the environment.

Phthalates have been shown to leach from products into the human body. Exposure to DEHP has been associated with adverse reproductive, neuro-behavioral, and respiratory outcomes and metabolic diseases such as insulin resistance (2).

• DiNP and DEHP are on the Proposition 65 list of chemicals known to California to cause cancer.
• BPA is an endocrine disruptor, affecting hormones, and is linked to reproductive disorders, heart disease and cancers.

It’s very rare to have any sort of allergy to Nitrile gloves. On the other hand, between 8 to 17% of health care workers and others who regularly use latex gloves are allergic to latex.

The allergy symptoms vary from mild to severe; it can be from skin redness, itching up to difficulty breathing, coughing & sneezing.

This reason alone, give Nitrile gloves an edge over latex gloves when it comes to food handling.

Nevertheless, this is not the only difference between Nitrile and latex gloves (read more here).

There should be a balance between economical factors and health concerns.

We at MEDRUX put health concerns as a top priority and believe that choosing the right glove for food services has a serious impact on the food industry.

The use of PVC gloves (Vinyl) is not recommended for foodservice industry.

Many healthcare institutions around the world, including U.S.-based Kaiser Permanente, have opted for nitrile gloves rather than vinyl.

Kaiser, the nation’s largest integrated health care delivery program and user of more than 50 million gloves a year, also has moved away from tubing made from PVC.

This gives you enough indication as an end-buyer or consumer what glove type to focus on and how to plan for your next glove project. 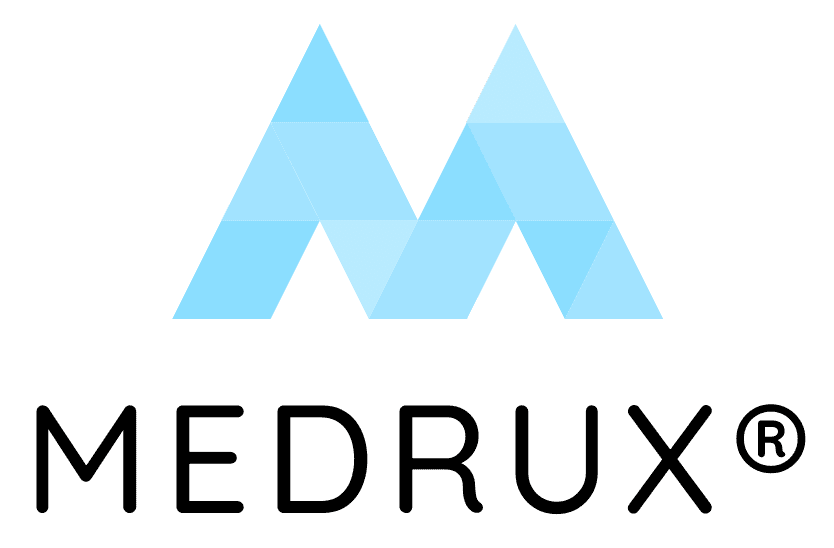 Leave your email to get all hot deals & news which benefit you most!
© 2021 Medrux. All Rights Reserved
Select the fields to be shown. Others will be hidden. Drag and drop to rearrange the order.
Click outside to hide the compare bar
Compare
Wishlist 0
Open wishlist page Continue shopping